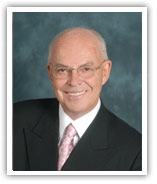 Howard Putnam is the former CEO of Southwest and Braniff Airlines and Group VP Marketing for United Airlines. Howard is a business and motivational speaker, author, consultant, commentator, and online mentor on: Leadership, Customer Service, Change, Transformation and Ethics.

Howard Putnam was raised on an Iowa farm and learned to fly out of a pasture in his Father’s J-3 Piper Cub. He entered the airline business as a baggage handler at Midway Airport in Chicago for Capital Airlines at age 17. Capital was soon merged into United and Howard held thirteen different positions in sales, services and staff assignments in several cities, before being named Group Vice President of Marketing for United Airlines, the world’s largest airline, in 1976.

In 1978 he was recruited to become President and CEO of fledgling Southwest Airlines in Dallas, TX. While at Southwest Howard and his team tripled the revenues and tripled profitability in three years. They also successfully guided Southwest through airline deregulation and Southwest was the first air carrier to order the Boeing 737-300, which later became the largest selling aircraft ever for Boeing.

Howard led the visioning process at Southwest as well as further developing the “fun” culture and excellent customer service that Southwest is still known for today. Southwest has been profitable every year for over thirty years, a record unsurpassed by any other airline.

In 1981, Howard was recruited by the board of directors of Braniff International to come aboard as CEO and save and/or restructure the financially failing airline. He was the first airline CEO to successfully take a major carrier into, through and out of chapter 11. Braniff flew again in 1984.

He is the author of “The Winds of Turbulence” on leadership and ethics. Harvard University wrote a case study on his experiences at Braniff, “The Ethics of Bankruptcy” as a model as to how to handle stakeholders in crisis.
He has also been an entrepreneur, serving as Chairman of a startup investment company and two small manufacturing and distribution companies.

Howard and Krista have two children, Michael, a commercial airline captain and Sue, in public relations and marketing.

Successful Strategies Through Turbulent Times
Leaders must have a clear and concise vision if they want their organizations to survive and thrive through turbulence. A clear understanding of what business you are really in is critical. Cultures can then be developed to support the vision and business. Bottom line improvement comes through your people. Howard shares his principles of leadership and outlines key strategies to navigate turbulence successfully.

Creating a Culture and Process for Ideas to Emerge
Innovation occurs in organizations that embrace a culture for risk taking and idea implementation. Howard Putnam proved this philosophy works when he was CEO of Southwest Airlines. He positioned and organized Southwest for growth and profitability utilizing a very flat management structure with decision-making and idea development imbedded in everyone’s job scope and responsibility. Individuals and teams were rewarded for risk taking and for designing out of the box processes and improvements in productivity, customer service, cost containment, safety and profitability. Brands develop when people thrive in the vision and experience.

Transforming Organizations Successfully & Profitably
Many organizations are out of alignment in the current turbulent environment. Their design is outdated with bureaucracy and a hierarchy that is expensive and inefficient. Howard Putnam will show you how to transform your business into a “flow state” organization that is focused, nimble, flexible, cost effective and able to utilize the “stages of turbulence” which he will identify for you to take advantage of being in a change state.

Hiring Attitudes & Developing Their Skills
Successful organizations that are in business for the long term, place their people first if they want sustained bottom line improvement. Howard Putnam led the visioning process at Southwest Airlines in which a key element was the culture, putting their people first and matching attitudes with the culture. Happy employees and superior customer service resulted from this concept. He will share behind the scenes looks on how this was accomplished with great stories, humor and concrete ideas and suggestions.