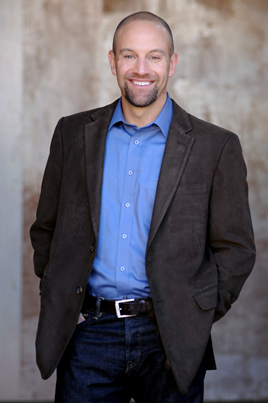 Mike Robbins is the author of two books, Focus on the Good Stuff and Be Yourself, Everyone Else is Already Taken, which have been translated into fourteen different languages. His forthcoming book, Nothing Changes Until You Do, comes out in May of 2014.

Infusing Life and Business with Authenticity and Appreciation

As an expert in teamwork, emotional intelligence, and the powers of appreciation and authenticity, Mike delivers keynote addresses and customized seminars that empower people, teams, and organizations to work together effectively and be more successful. He has inspired tens of thousands of people around the world to reach new levels of awareness and productivity, both personally and professionally. Through his speeches, seminars, and writing, Mike teaches people important techniques that allow them to be more grateful, appreciative, and authentic with others and themselves.

His clients include some of the top organizations and institutions in the world, such as: Google, Wells Fargo, Adobe, Charles Schwab, Twitter, the U.S. Department of Labor, Gap, New York Life, Stanford University, Chevron, eBay, Kaiser, UC Berkeley, Genentech, the San Francisco Giants, and many others. Mike is a member of the National Speakers Association and is one of less than 10% of the professional speakers in the world to have earned the prestigious Certified Speaking Professional (CSP) designation.

He has been featured on ABC News, the Oprah radio network, in Forbes, the Washington Post, and many others. He is a regular contributor to Oprah.com and the Huffington Post. Mike was also the host of his own radio show in 2009 and 2010, “Let’s Get Real,” on Energy Talk Radio.

Prior to his speaking, writing, and consulting career, Mike was drafted by the New York Yankees out of high school. He turned the Yankees down and instead chose to play baseball at Stanford University, where he pitched in the College World Series. Mike was drafted by the Kansas City Royals out of Stanford and played three seasons of professional baseball with the Royals organization before arm injuries ended his playing career while still in the minor leagues.

After his athletic career was cut short by injuries, Mike worked in sales and business development for two Internet start-ups. When the dot-com “bubble” burst in 2000 and Mike was laid off, it allowed him to follow a deeper passion – empowering and inspiring people – and opened the door for Mike to start working full time as a speaker, author, and coach.

In addition to earning a degree from Stanford in American Studies with a specialization in race and ethnicity, Mike has continued to educate himself. He has extensively studied many disciplines of both personal and professional development, and received training from the Coaches Training Institute.

Mike is a former board member for two non-profit organizations – Challenge Day (a powerful youth organization that focuses on peace, healing, and personal development for teens) and The Peace Alliance (an organization focused on creating a culture of peace here in America and around the world, as well as a grassroots political campaign to create a cabinet level U.S. Department of Peace).

In addition to his three books, Mike is also a contributing author to: Chicken Soup for the Single Parent’s Soul, Creating a Marriage You’ll Love, and Thirty Things to Do When You Turn Thirty.

Mike lives in Novato, CA (in the San Francisco Bay Area) with his wife Michelle, and their two daughters, Samantha and Rosie.

Focus on the Good Stuff: The Power of Appreciation

Inspire success, engagement and perspective by being appreciative Appreciation is one of the most powerful, yet overlooked aspects of successfully motivating and empowering people and teams. According to the latest research in the fields of positive psychology and strengths-based leadership, when individuals and teams put more attention on what is working and their strengths, instead of focusing on problems and perceived weaknesses, they thrive. Through this program, which is based on the key principles of his book Focus on the Good Stuff, Mike Robbins illustrates exactly how appreciation impacts productivity, morale, and success.

Be Yourself, Everyone Else is Already Taken: The Power of Authenticity

Create trust, confidence and team unity by being real Authenticity is fundamental to relationships, communication, and success. Now more than ever, people, leaders, and teams must utilize the power of authenticity in order to build trust, resolve conflicts, and create cohesion. Some fascinating research in the field of emotional intelligence is proving that being real, honest, and even vulnerable are key elements to success and engagement. Through this program, which is based on the core principles of his book, Be Yourself, Mike Robbins illustrates exactly how authenticity impacts relationships, trust, and productivity.

The Keys to Creating a Championship Team

Enhance loyalty, attitude and success by doing what winning teams do A “championship team” is a group of people who can effectively handle adversity and conflict, trust one another, communicate clearly and authentically, and appreciate each other in a positive way. In this program, which is based on key principles from both of Mike Robbins’ books, as well as his background as a professional baseball player, he teaches people, leaders, and groups the fundamental aspects of creating successful teams that truly win.

Mike is also happy to deliver a breakout session or seminar on the following topics:

Being a True Champion

Nothing Changes Until You Do