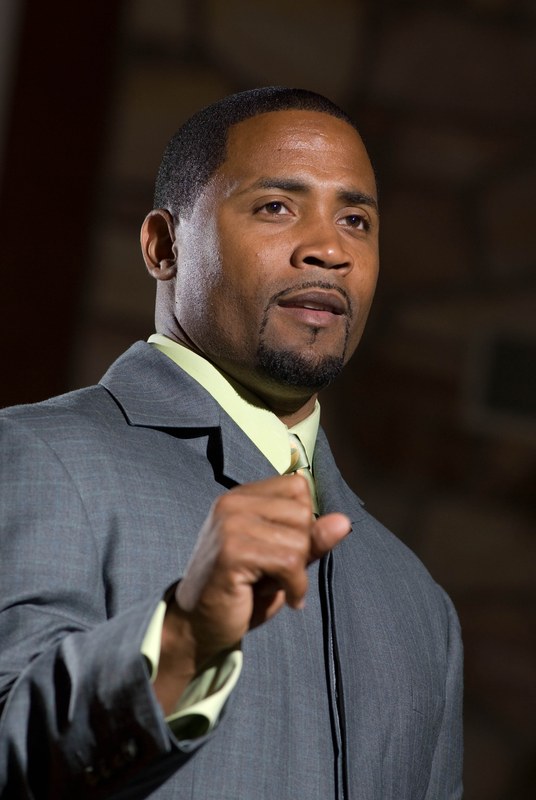 Mike Minter is best known for his skills as an all pro-safety with the Carolina Panthers, where he spent his 10-year NFL career. Minter has lived the highs of playing in the Super Bowl and the lows of a team that won only one game in 16.However, his new-found success as businessman and philanthropist will soon rival his fame on the field. As a motivational speaker, Minter's insights are unique, his delivery is impeccable and his credentials are unparalleled. He makes his listeners laugh and think while encouraging them to find their true purpose in life.

Mike Minter is best known for his skills as an all pro-safety with the Carolina Panthers, where he spent his 10-year NFL career. Minter has lived the highs of playing in the Super Bowl and the lows of a team that won only one game in 16.

However, his success as businessman, philanthropist and coach will soon rival his fame on the field. As a motivational speaker, Minter’s insights are unique, his delivery is impeccable and his credentials are unparalleled. He makes his listeners laugh and think while encouraging them to find their true purpose in life.

Drafted by the Carolina Panthers in 1997 as a graduating senior from the University of Nebraska, (47-3 college record and two-time back to back national champions),Minter contributed as a critical component of the Panthers secondary, with consistent play, mental toughness, special teams versatility and performance.

During Minter’s NFL career, he served as team captain for 6 years, was the all time team leader with 954 tackles and played in the 2003 Super Bowl.

At a time when free agency reigned and swapping teams for higher salaries was expected, Minter’s loyalty to one team is rare. In fall 2008, Minter accepted the role of Head of Football Operations and Head Football Coach at First Assembly Christian School in Concord, NC, overseeing all middle and high school football teams. After stepping into this role, Minter took the First Assembly high school team to back to back State Championships, with a record of 33 wins and only 4 losses. However his greatest accomplishment in this role was helping to secure college football scholarships for twelve of his players.

Immediately following his position at First Assembly Christian School, Mike accepted the position as Assistant Head Coach/Co Defensive Coordinator/Defensive Back and Special Teams Coordinator at Johnson C Smith University, a Division II school located in Charlotte, NC. In just one season, The Redzone percentage ranking was raised from 114 to 12, the Pass Efficiency Defense ranking went from 133 to 36 and the Overall Defense Ranking changed from 124 to 74. Two players were coached to an All-Conference ranking and the Head Coach received Coach of the Week Award three times. JCSU had their first winning season since 2006 and won the Pioneer Bowl, the first bowl win in school history.

Continuing within the collegiate coaching ranks, Minter was named the Special Teams Coordinator and Assistant Defensive Coach at Liberty University in January 2012. Recruiting and signing prospective student-athletes across the country and focusing on athletes who embodied academic, athletic, and personal success was top priority. Special Teams made an immediate impact on the field, leading to multiple athletes earning weekly conference honors.

Just recently, Mike has joined the Campbell University family in Buie’s Creek, North Carolina as Head Football Coach. He is looking forward to not only helping to develop this group of young men into champions on and off the field, but to having a winning season in 2013 as well.

But for Minter, there is more to life than just football.

Minter earned his degree in engineering from the University of Nebraska (where he was inducted into the Hall of Fame), and is now building many successful businesses.

With 4 core values in mind, (Abundance, Legacy, Excellence and Integrity), Minter leads Concord, NC based Minter Enterprises, a multi-faceted business, with a commerce plus cause approach, impacting real estate development, general contracting and construction, business consultation, publishing, public speaking and a 501(c)(3) non-profit organization focused on youth development. As the leader of the organization, Minter leads a team of subject matter experts that have a significant portfolio of closed transactions. Minter Enterprises developed a luxury gated community in Kannapolis, NC with homes ranging from $1.2-$4 million that sold out in record time. Minter Consulting is a “Business to Business” center of excellence with a team of thought leaders consulting companies with services in finance, business management, marketing and operational efficiency. Customers have included Wachovia/Wells Fargo, Hertz Rental Cars and numerous other businesses around the country.

As a business leader, Mike Minter gives all credit for his accomplishments to God. His philosophy is: God first, family second and work last.

“You know that you are doing everything for His glory, and not yours,” Minter stated. This man with a reputation for unprecedented integrity takes his faith with him wherever he goes–the football field, the altar and the boardroom.

A professional athlete and multi-faceted business leader, Minter still makes time to give back to others. His dedication to improving the lives of others has led him to serve as a board member for The Harvey Gantt Center, Youth Development Initiatives, the YMCA of Greater Charlotte, Cabarrus County Education Foundation and as a board advisor to Charlotte Parent University.

It was through the YMCA that Minter visited West Africa in 2007. As the YMCA’s Ambassador to Africa, Minter and his sons joined a small group sent to assess ongoing efforts. Minter also works with the Salvation Army Boys and Girls Club, has been a regional spokesperson for the National Kidney Foundation and has served as an Honorary Chair for the American Diabetes Association and Autism Speaks.

In 2009 Minter began working on establishing his own non-profit, Minter Community, which umbrellas youth programs designed to provide life skills, educational and athletic programming for youth from the ages of 7 to 14 years of age.