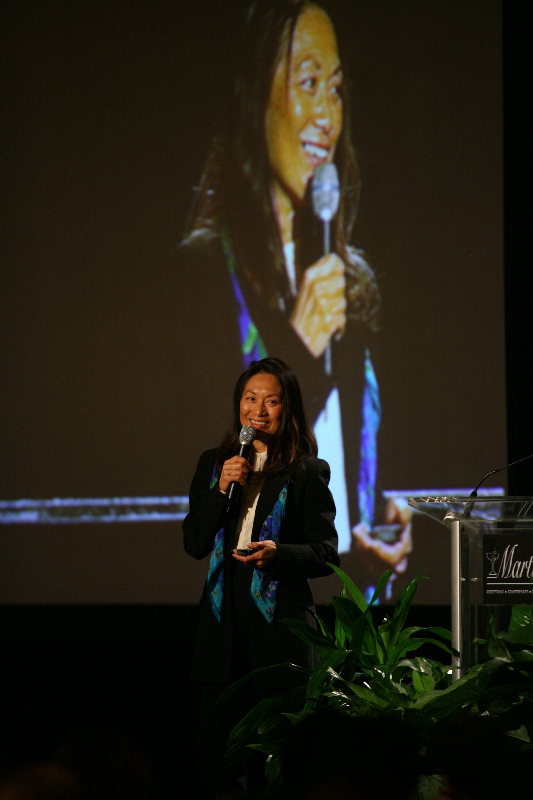 Marilyn, formerly CEO of Aveda Corp., President of Reebok Apparel & Retail Group and V. President of NIke, was recognized as one of the Top 30 Female Entrepreneurs in the USA by Fempreneur magazine. Jack Canfield detailed her work in his book on the strategies for success, “The Success Principles”. She is featured as in the best selling book, “Fearless Women, midlife portraits” by Alspaugh, Kentz, and Halpin. Daryn Kagan, former CNN anchor spotlighted Marilyn as one who dared to dream that they can make a difference, in her book, “What's Possible”.

How to Use What You Got to Get What You Want

Marilyn Tam has had an extraordinarily diverse life, from her beginnings in a traditional Chinese family in Hong Kong to her meteoric rise through the executive ranks of the international business world to become an influential corporate leader, speaker, corporate consultant, author and respected humanitarian.

Her distinguished background includes executive roles at numerous world-class companies, including CEO of Aveda, President of Reebok Apparel & Retail Group and Vice President of Nike. She is also a successful entrepreneur, having developed and built four companies in fields as diverse as a corporate consulting & training company, a web portal company, a supply chain software company and an integrated health and wellness company.

Marilyn consults and speaks globally with Fortune 500 companies, governments and non-profit organizations and on leadership, diversity, change management and how to integrate social & environmental concerns into businesses profitably.

Marilyn is the co-founder and Executive Director of the Us Foundation, whose mission is to facilitate global action plans and dialogue to address social, economic and environmental issues. Us Foundation is one of the partners for United Nations Habitat-II, and was nominated as a candidate for the “Best Practice Award” from the United Nations’ Habitat II.

She is a director on the national board of SCORE Association, a resource partner of the U.S. Small Business Administration. SCORE is dedicated to entrepreneurial education and the development, growth and success of small businesses nationwide.

She also served on the international board of The Reebok Human Rights Awards, along with former President Jimmy Carter; renowned musicians Peter Gabriel, and Sting, Rafer Johnson, Chairman of the Special Olympics and Kerry Kennedy Cuomo of the Robert F. Kennedy Memorial Center, and Paul Fireman, Chairman of Reebok International Ltd. She was also awarded The Reebok Human Rights Award for her humanitarian work. Whether she is directly improving the lot of workers in her contract factories around the world, or developing and conducting seminars to train other business leaders and entrepreneurs in business leadership programs internationally, Ms. Tam always gives back. She is committed to the belief that philanthropy is integral to and provides an essential balance and relevance to her work.

Marilyn’s work has also included numerous appearances on television, radio and Internet as well as in international conferences. She has developed and presented to a wide range of audiences in corporations, governmental and non-profit organizations.

She regularly serves as producer and Master of Ceremonies for events around the world, including acting as the spokesperson and keynote speaker for Universal Forum of Culture’s conference on the Role of the Corporation in the 21st Century in Barcelona, Spain, presenting at the United Nations Habitat-II Conference in Torino, Italy, as well as organizing the inaugural Season for Non-Violence Event commemorating M.K. Gandhi and M.L. King in 30 countries.

Marilyn was an advisor to the country of Bhutan, working with the Ministers and government officials to transition the country into the 21st Century while retaining their cultural and environmental heritage.

According to Brand Channel, she is one of the four most prominent names in brand ethics globally.

She was honored with the Artemis Award for her business and humanitarian work by the Greek government and the Euro American Women’s Council in Athens, Greece, with her likeness on a Greek postage stamp. eWomenNetwork presented her with their Lifetime Achievement Award.

Marilyn is featured seven inspirational documentary movies including GLOW Project, The Compass, Vitality and The Gratitude Experiment, for her remarkable accomplishments and inner wisdom. Marilyn is a lifetime member of Who’s Who World Wide and is listed in Who’s Who in American Women.

She was honored with a Ph.D. in Humane Letters by Old Dominion University, Norfolk, VA.

How to Use What You’ve Got to Get What You Want: Leadership and Personal Excellence
Whatever qualities you have, no matter how limited or broad that they may be in your own mind, global corporate executive, entrepreneur and humanitarian Marilyn Tam will show you how to use what you’ve got to achieve your dreams. What seemed to be disadvantages in Marilyn’s life were in fact her keys to personal and professional success and freedom.

Diversity: How to Reap the Rich Harvest of Culture, Creativity and Community
Learning how to benefit from diversity and to be a leader in a more diverse and global world is a challenge and an opportunity. Indeed, embracing and leveraging diversity is the only way to prosper and grow in the 21st century. In Marilyn Tam’s interactive style you will hear stories, learn principles, and apply action steps from her global business, humanitarian and consulting experience to become a more successful global leader.

Women in the Workplace and Marketplace
In today’s highly competitive and interconnected world, women are invaluable to any enterprise. Women have specific strengths that are critical in today’s global economy and environment. Yet there are cultural biases in both men and women, and many structural obstacles that may hinder a woman’s progress in attaining her highest potential. This is a loss, for the company, as much as it is for the women who fail to fully contribute because of this.

Life Balance: How to Juggle Work, Home, Personal and Spiritual Health
The conflicting expectations and conditioning that people, especially women, have been bombarded with makes them vulnerable to feeling unsatisfied, second rate and confused. The current poor economic times, incessant marketing message of “you can have it all” and the hyper-speed of change is hitting people so hard that they are oftentimes reduced to feeling despair in being able to attain any semblance of a balanced life – and even more critically, economic sustainability.

Leadership Excellence: How You Can Achieve It
To be a successful Leader in the 21st Century takes new skills and awareness. Fresh managerial tools and talents are needed to deal with today’s global business and the tighter and more visible connections between all aspects of the development, production and consumption cycle. Marilyn shares the secrets she learned from her international business and humanitarian experience – how to be the more effective and productive in business and life while creating collaborative and lasting relationships.

The Role of Business in the 21st Century
The 21st Century is a wired and interconnected world, which has modified the roles and responsibilities of business. Business is no longer, if it ever was, only focused on the sole pursuit of the current Profit & Loss statement. It is now an integral and dynamic part of the global community, economy, environment and culture. For business to thrive in these circumstances, clarification of the mission and principles of the organization is needed.

Global Business Today: The Opportunities and Challenges
Business today is global. The development, production and consumption chain stretches from wherever and however “local” the company is to all points of the globe. To excel in this marketplace means that each person and each company have to understand and be proactive about the opportunities and challenges that come with globalization.