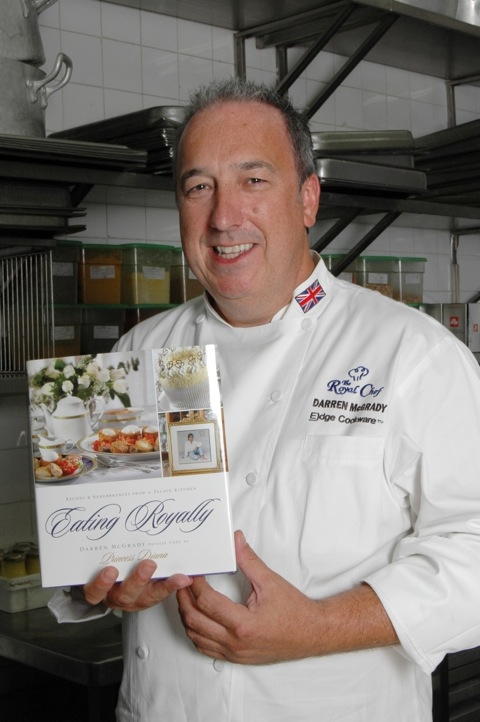 Darren is currently employed as a private chef in Dallas, TX. He and his wife Wendy have three children, Kelly 9, Lexie 6, and Harry 2. He moved to the U.S.A. in May 1998. Darren was born in Nottinghamshire, England and attended Clarendon catering college in Nottingham (1978-1980) where he obtained the U.S. equivalent of a bachelor's degree in Culinary Arts. Upon graduation, he was accepted at London's Savoy hotel and trained under the maitre chef de cuisine Sylvino Trompetto. During his two years here (1980 – 1982) he held the positions of first commis saucier and entremetier.

In 1982 he moved to the royal kitchens at Buckingham Palace. After 4 years working on each section of the kitchen he was promoted to chef de partie. He then chose to specialize in patisserie and over a seven year period became senior pastry chef. During his 11 years royal service he cooked for Queen Elizabeth II and H.R.H. the Duke of Edinburgh and their guests on a daily basis and catered Banquets for foreign heads of state including Presidents Bush, Clinton, Reagan and Ford. His duties included traveling with the royal family to Windsor Castle, Sandringham House and Balmoral Castle as well as on H.M.Y. Britannia on Royal Tours around the world.

In 1993 he moved to Kensington Palace as private chef to H.R.H. the Princess of Wales where for four years ( until the tragic accident in August 1997) he took control of Princess Diana’s, William and Harry’s day to day menus and the preparation and catering of private and official lunch and dinner parties, liasing with the Princess daily.

Choosing to decline an offer from H.R.H. the Prince of Wales for Darren to become his Private Chef at St James Palace and Highgrove, he decided to end his 15 years Royal service with a new challenge in the U.S.A.

Since the Princess’s death Darren has devoted a considerable portion of his free time to working for the causes she supported including shelters for battered women, charities for children with chronic illnesses and major physical disabilities, and breast cancer charities. Darren is a board member of the Pink Ribbons Crusade, a not for profit charity that uses its museum type exhibit “A Date with Diana” to promote Breast Cancer awareness.

He has appeared three times as a guest on CNN’s Larry King Live, cooked on the CBS Early show in New York, CNN covering the Royal Wedding, Good Morning Texas, CBS 11 and also BBC and SKY television and Radio in England and across Europe. He also teaches cooking classes around the country. Darren’s first cookbook Eating Royally: Recipes and Remembrances from a Palace Kitchen was released in August 2007.