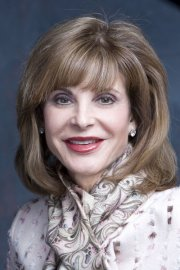 We've all met people who turn lemons into lemonade. It isn't often we meet the person who builds the lemonade stand! Taking two of life's biggest challenges-- cancer and divorce-- Christine has built companies from those adversities based on her award-winning theories on therapeutic humor. A top sales producer, Christine says, "If you believe in your product, company, service or cause, anything is possible." Don't forget to laugh! TM

Her experience taught her how to market and sell products, services and herself. Now, Christine shares that message with others. Christine definitely cracked “the glass ceiling.” By 40, she was Senior Executive Vice President for The SPAR Group, an international merchandising and information services firm in New York.

As the top salesperson in the multi-billion dollar retail services industry for over eight years, Christine’s accounts included Kmart, Toys ‘R’ Us, Wal-Mart, AT&T, Mattel Toys, and Revlon. Taking her company from a million dollar per year loss to over $54 million in sales, Christine signed the largest contract in the history of her industry with Procter & Gamble, doubling the size of her company overnight.

Diagnosed with breast cancer in December of ’94, Christine went on to write eight award-winning, humorous portrayals of her story in books entitled Not Now…I’m Having A No Hair Day! , Our Family Has Cancer, Too!, Inspiring Breakthrough Secrets to Live Your Dreams, Cancer Has Its Privileges: Stories of Hope & Laughter, and Your Guardian Angel’s Gift.

YOU, Inc. The Art of Selling Yourself, released March, 2007 by Warner Books, was named a “Notable Book of 2007” by the American Booksellers Association. She is also a featured author in Masters of Sales (August, 2007).

• Christine’s newest books, released in 2011, are entitled Laugh ‘ Til It Heals: Notes from the World’s Funniest Cancer Mailbox and The Clue Phone’s Ringing… It’s for You! Healing Humor for Women Divorcing.
In 1994, Christine faced a life-changing experience and began her own company, The Cancer Club ®, now the world’s largest producer of humorous and helpful products for people with cancer. In 2010, after going through two divorces, she started Divorcing Divas which hosts all-day educational conferences for people facing divorce.

Christine’s philosophies and strategies for becoming your industry’s leader are proven theories that have propelled her and the companies she’s worked with to the top of their fields. Ideas, action, results…

Featured in the New York Times, The Wall Street Journal, Better Homes & Gardens, MORE, American Health, Golf Digest, as well as The Singapore Women’s Weekly and the Hindu in India, CNN Live called her “one of the world’s leading authorities on the use of therapeutic humor”. She also appeared on Lifetime Television Network’s New Attitudes show, and the Leeza Show.

Host of The Christine Clifford Celebrity Golf Tournament, a benefit for breast cancer research, Christine’s inaugural event raised over $100,000, making it the most successful first-year event in the history of the American Cancer Society. Her total contribution has been over $1,000,000 and she has received the Council of Excellence Award for income development from the American Cancer Society.

In July, 2002, Christine was awarded The Order of the Delta Gamma Rose from the Sorority to confer special honor upon alumnae members who have made distinguished contributions to the nation or to the world through their individual efforts and talents and whose achievements have been given national recognition. It is the highest honor one can receive from the Sorority.
July, 2002 Christine was awarded her “CSP” (Certified Speaking Professional) designation from the National Speakers Association. The letters “CSP” following a speaker’s name indicate a speaking professional with proven experience who brings a proven track record of experience and expertise. Less than 7% of the 5,000 speakers who belong to the International Federation for Professional Speakers hold this professional designation.

Christine has two sons: Tim and Brooks, is grandmother to Siberian Husky Skylar, and lives in Minneapolis, MN.

YOU, Inc. The Art of Selling Yourself

What is it that people buy? They buy how you make them feel. The question is not, “Am I a salesperson?” The question is: How can I be more effective. Learn to position yourself in such a way that people want to do business with YOU.

Selling the Invisible: Four Keys to Marketing Your Service

Struggling to market your services? Discover why you must charge a premium for your services, even in a recession and tough economy. Learn how to make your brand memorable. Discover what your packaging—both your product’s and your personal package—says about you and your company. Learn strategies to keep, nurture, expand and grow extraordinary customer relationships that will last a lifetime.

Are you ready to be propelled to the top of your field? Christine Clifford shares the strategies that she uses to become an industry leader in two years or less. Discover how to:

Laughter: Prescription for a Cure!

Cancer is a laughing matter? Who knew? Christine Clifford. A Pioneer in the therapeutic humor movement, this 18+ year cancer survivor and author of eight books has spoken to over 2,000 healthcare organizations and left them in stitches. Really. Using her trademark cartoons, true experiences (including the classic story of her flying wig at a major golf tournament), and audience participation, Christine will leave your audiences with hope, laughter and positive thinking. Don’t forget to laugh! ™

Christine is a survivor: not only of breast cancer, but two divorces as well including a marriage that involved domestic violence. As CEO/President of Divorcing Divas, she shares her stories of fear, uncertainty, hope and inspiration that people going through divorce can find life~ and a good life~ on the other side. Once again, she uses cartoons from her book The Clue Phone’s Ringing… It’s for You! to poke fun at herself and remind audiences, it’s not the end… it’s the beginning.