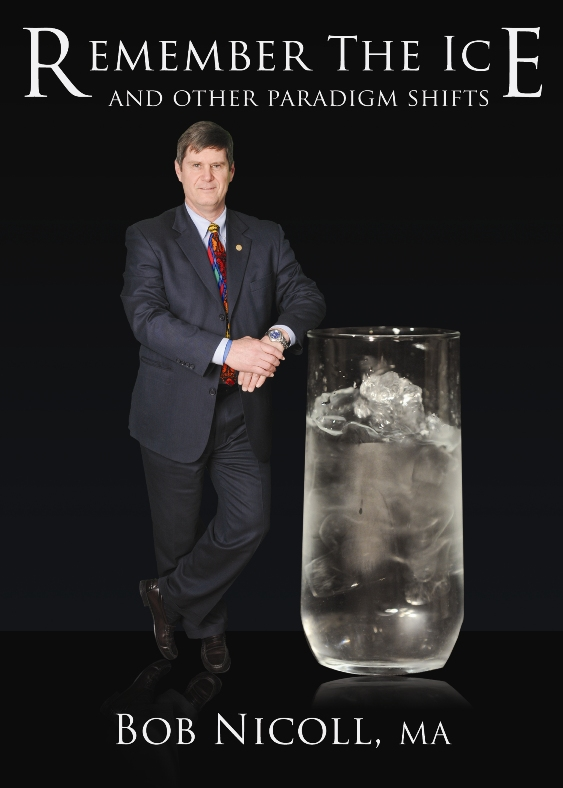 Communication is at the core of every personal moment, experience, transaction and interaction. Bob has created an innovative Sales and Customer Service Program called Remember the Ice. Based on the statement: There is Power in the Clarity of your Articulation; Remember the Ice is a comprehensive program that helps you: Fix Broken Messages. Increase Sales with BETTER word choice! Re-Frame your message. Attract the life you want through empowering word choice. Find out how a simple change in word choice resulted in a 500% increase in sales in less than 5 weeks!! If you are in marketing, advertising or sales: you want to have Bob train your organization so you can get the bottom line results you are looking for: INCREASED SALES!!

Whether you say a powerful message in simple form like “I love you,” or with more complexity like, “You have performed admirably during these challenging times,” making sure it’s clear and empowering requires craftsmanship; without it your message will fall apart. Each word deserves as much attention as the next.

The art in articulation is characterized by the use of clear, expressive language, composed thoughtfully one word at a time. You are endowed with the power of speech. Think before you use it and your messages will be as moving as the world’s greatest symphonies.

There is power in the clarity of your articulation. ™ When I composed this message, the words came easily. For more than 40 years I have nurtured a passion for linguistics and BETTER — or empowering – word choice; more specifically, the juxtaposition of words. By definition; juxtaposing means to place side by side, especially for comparison or contrast. In the composing of your message, paying attention to the juxtaposition of your word choice is critical.

Since completing my Bachelors Degree in Psychology in 1972, and Masters in Counseling in 1974 I have focused my energies on studying the power of word choice: The Psycho-physiology of Words.

I refined my skills working with leading personal growth and development leaders over the next 20 years while earning certifications in Rational Behavior Therapy and Neuro-Associative Conditioning Systems.

In my lifetime I have been a counseling psychologist, a business owner, consultant, a motivational speaker, a sales trainer, restaurant owner, financial planner and a top sales manager. In each role I have consistently found opportunities to tap into my passion: Helping people get better results with BETTER Word Choices!.

In 2005 I reflected on the lessons I had been teaching, learning and sharing with the different people in my life over the years, and decided it was time to gather them together and share them with the public. I had been leading seminars and workshops, and developed a program with a workbook and companion CDs and DVDs. With this book I hope to reach out to more people so that readers like you can make use of the empowering tools that change lives.

Remember the Ice and Other Paradigm Shifts is an easy to use, yet comprehensive program that teaches you the how and why of enhancing your communication skills with clients, family members, friends, co-workers — anyone who is important to you. It helps you stay focused on your task and accomplish more goals because you are conveying your message, and articulating your thoughts in a clear, precise manner. You eliminate confusion and gain confidence in your message and ultimately attract more of what you want. You get the results you want!

Born in Boston, right down the road from Fenway “Pahk”, I have been a “die haahd” Sox fan from birth. Our family lived in Westwood, a little town about 20 miles southwest of Boston. Some of my favorite memories include sporting events because growing up around Boston I was afforded the opportunity to attend Red Sox games at Fenway, and several Celtics and Bruins games in the fabled Boston “Gahden”, and even went to some of the early Patriot’s games. Sports have been a major part of my life. I grew up watching the Boston Marathon. Later on I would run in it twice, (1969 and 1971) long before it became the large spectacle it is today. I also witnessed world record setting performances at the BAA Indoor Track & Field Games.

Thus, the heroes of the sporting world have always inspired me. World-class athletes tend to be extremely talented self-motivators. They are hyper-aware of the language and attitudes that encourage success and push them beyond their previous concepts of limitation. I believe those strategies are available to every one of us, and that the key to making them work for us lies in understanding the power of words and word choices.

I earned my BS in Psychology from Davis and Elkins College in 1972 and my MA from West Virginia University (WVU) two years later. I entered college with an undeclared major, but within weeks I realized that my fascination with sports motivation and an insatiable curiosity about what makes people tick was a perfect fit with the study of psychology.

While at Davis & Elkins College, I was a member of the NAIA National Soccer Championship Team of 1970, and runner-up in 1969 and 1971. We had also won the National Championship in 1968 as well. I embraced the power of sports motivation and began to focus on how different words and phrases worked on my teammates and me. I took note of how much more powerful positive reinforcement was than the put-downs and temper tantrums.

At WVU, the comprehensive curriculum introduced me to many counseling theories. I was really drawn to the Cognitive approach of Rational Therapy developed by Dr. Albert Ellis. As a post-grad student I was introduced to Dr. Maxie C. Maultsby, Jr. He expanded on Dr. Ellis’ concepts and developed Rational Behavior Therapy (RBT). I gained my certification in RBT in 1975 and have been enamored with the Cognitive Behavior Therapy ever since. I have used the concepts from his ground breaking book Help Yourself to Happiness since it’s release in 1975.

In 1987 I was introduced to Unlimited Power, the national best-seller by Tony Robbins. By 1991, I was working and training with him, and had the pleasure of being in his Certification Class in ‘91 when he finished his 2nd best seller: Awaken the Giant Within. When I returned to Phoenix, AZ, I began to look for ways to apply my new knowledge.

I was primed to begin to really focus on empowering word choice and how it can change lives and influence people. In July of 1991, I began testing out my Remember the Ice theories.

Remember the Ice is a simple, yet comprehensive concept. Anyone can do it. Anyone. And yet, the results are so powerful, they never fail to amaze me. Watching people begin to grasp it is fun. When the light bulb goes on, the look on their face is priceless. It’s just so much fun to observe people’s lives open up to great possibilities they were previously unaware of — because of a simple shift in word choice.

So many of us walk through life knowing somewhere in the back of our minds that there is something missing, that there has to be a better way. Well, here’s the better way. It’s self-empowerment that begins with the words you choose when you speak.

The cornerstone of Remember the Ice is this truism:

There is Power in the Clarity of Your Articulation. TM

In this book, I will teach you how to achieve that clarity.

As I worked my way through college, graduate school, a couple of thriving practices, multiple seminars, workshops and certifications over the years, I renewed and strengthened my passion for studying Rational Behavior Therapy, the fundamentals of Rational Self Counseling, and language choices. I applied the theories, tweaked them a little, made them my own, and uncovered some of the most powerful tools available to mankind.

In a nutshell, BETTER, or empowering, word choice, begat from a philosophy of Respectful Elegance, wrapped in Rapport and embraced by Congruency will lead you to attracting more of what you want. Empowering word choices impact your life; use them to attract the life you want. Fortunately, it’s fairly easy to grasp the concept, and this book will teach you how to use it to your benefit.

I derive great pleasure from watching people learn to use these tools and apply them in their personal as well as their business lives.

“Helping you attract the life you want through empowering word choice.”

Remember the Ice and Other Paradigm Shifts is becoming an international phenomenon with copies in 40 countries since its initial release in October 2008.