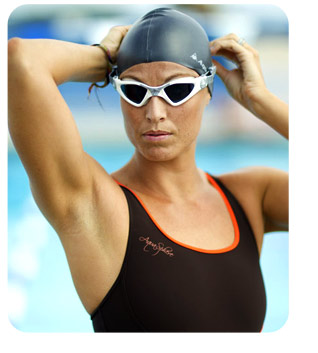 Amanda Beard made her first Olympic appearance at the 1996 Atlanta Olympic Games at the age of 14, while a student at Irvine High School in Irvine, California. She won silver medals in the 100-meter and 200-meter breaststrokes, and gold in the medley relay. Her young-teen manner captured the attention of the media, and she was often photographed clutching her teddy bear, even on the medal stand.

She won a bronze medal in the 200-meter breaststroke at the 2000 Sydney Olympics. Amanda attended the University of Arizona where she captured an individual NCAA National Championship in 2001.

Amanda gained popularity with her swimming expertise, but she is also well known for her other endeavors. Modeling has become a full-time career that she would like to continue and is also interested in more TV hosting opportunities. Amanda spends much of her time doing appearances for her Olympic Sponsors, speaking engagements for Breast Cancer awareness and talking with young swimmers throughout the United States about overcoming obstacles and setting high goals. Her comeback during the 2010 Nationals inspired women and mothers everywhere. She is currently training to compete in the 2012 London Olympics.