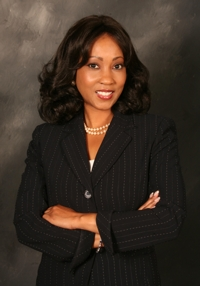 Alison Vaughn is an award-winning entrepreneur and co-author of the book, Inspired Style. This sought-after speaker is the Founder & CEO of Jackets for Jobs, Inc., which is a nonprofit organization that provides employment etiquette, career skills training and professional clothes to low-income individuals. Since opening the doors in 2000, the organization has assisted over 11,000 individuals with employment. This high profile organization has been supported and applauded by Donald Trump, ABC's "The View", NBC's "Today Show", and Oprah's O Magazine. A highlight of her career was the distinct honor of ringing the closing bell on NASDAQ. The organization is proud to have a partnership and be the charitable arm to TJ Maxx.

A decade of making a difference in the community.

Vaughn is proud to be one of the co-authors of the book, Inspired Style, she and other Top Image experts reveal strategies to always look and be your best. Inspired Style is the key ingredient to helping you understand and define your personal style, which is so much more than clothes and fashion.

Alison received a Bachelor of Science degree from Michigan State University and graduated from The Women’s Campaign School at Yale University, sponsored by Yale Law School. She is active with the NAACP and was a candidate for the 2006 Michigan State Senate.

Vaughn is one of Martha Stewarts “Dreamers into Doers”, in which Martha Stewart celebrates the passion of Women who turn their dreams into reality and Women Who Do.

She was named “Entrepreneur of the Year” by Alabama A & M University; “Businesswoman of the Year” by National Association of Negro & Professional Business Women, honored as a Women of Excellence by the Michigan Chronicle, Recipient of “Leaders, Legends & Luminaries” award from Lakeshore Engineering, Listed in the Who’s Who of Black Detroit for three years and Who’s Who among Female Executives., She is a recipient of the “Community Service Award” from the Alpha Kappa Alpha Sorority. She is a member of Association of Image Consultants International (AICI), Distinguished Women in International Service, Top Ladies of Distinction, Gamma Phi Delta Sorority, Eureka Communities Fellow, Michigan State University Graduate Alumni member, NAACP, The National Association of Female Executives, Women Impacting Public Policy and a member of the Charles H. Wright Museum of African American History. She is a contributing writer in the Michigan Chronicle & Michigan Front Page on Image & Style.

In her spare time, she enjoys traveling, reading and attending sporting events. She is a loyal Detroit Lions season ticket holder and a member of Word of Faith International Christian Center.

“What you do for others, God will do for you.”